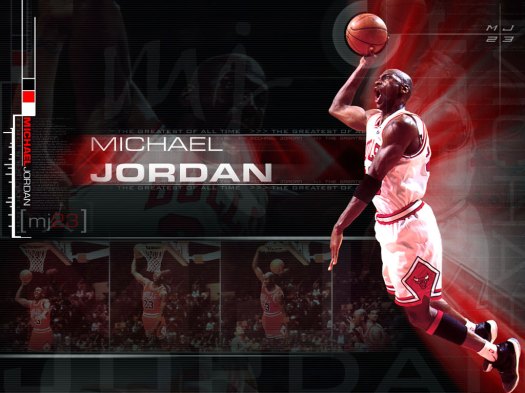 Alright, let’s get our sports talk going on. I’m hosting a debate about the Top 10 greatest basketball players in history and where Kobe Bryant and Lebron James fit on that list. Despite recent comments from Scottie Pippen that Lebron James might surpass MJ as the greatest player, there will never be another MJ.

Kobe and Lebron are both phenomenal players. I’m a fan of Kobe and think he’s an incredible player. He should be proud of his 5 NBA titles but there is no comparison between MJ and Kobe. Two years ago, he wasn’t in my list of Top 10 but Kobe’s 4th and 5th NBA title seal his place amongst the Top 10 greatest players of all time. As for Lebron, let’s wait till he wins couple championships. We all know he’ll easily be amongst the Top 10 players and likely in the Top 5. But let’s wait…

There is no comparison.

Over his career, he averaged an incredible 30.1 points, 5.3 assists, and 6.2 rebounds and had he not taken couple seasons off to pursue his baseball career, his numbers would even be that more incredible. His accomplishments are too many to list but here are some: 5 MVP awards, 10 All-NBA First Team designations, 9 All-Defensive First Team honors,14 NBA All-Star Game appearances, 10 scoring titles, and 6 NBA Finals MVP awards. He holds the NBA records for highest career regular-season scoring average (30.12 points/game) and highest career playoff scoring average (33.45 points/game). There is no equal.

He also revolutionized the game. Over his career, he averaged 19.5 points, 11.2 assists, and 7.2 rebounds and was still playing at an incredibly phenomenal level when he was forced to retired after 13 seasons. For some reason as a young teenager, I cried when he announced his retirement.

5 NBA titles and 3 MVP awards. 6 foot 9 inch point guard that could do everything including playing the center position with a baby hook.

Just consider his career average: 30.1 points, 22.9 rebounds, and 4.4 assists. Just think about that. Yes, it’s true that he didn’t have many direct competitors at the center position but just consider those numbers.  Think about the one season when he averaged 50.4 points and 25.7 rebounds – per game. 2 NBA titles and 4 MVP awards.

Probably did the most with the least physical athletic ability amongst those on this list but certainly amongst the best pure shooters in the league. Over his career, he averaged, 24.3 points, 10 rebounds, and 6.3 assists. 3 MVPs and 3 NBA titles. Also consider that he shot nearly 50% over his career (.496).

12 time All Star, 11 All NBA team, 1 NBA title, and 1 MVP. As most know. he’s the ONLY player who has averaged a triple-double over an entire season.

Plus points for his courage in the face of overt racism over his career. Minus points for not winning enough titles but then again, he didn’t have the supporting casts of others.

Give Kobe his props. Another complete player. 5 NBA titles and surprisingly, will likely end his career with only 1 MVP award.  His current career averages: 25.3 points, 5.3 rebounds, and 4.7 assists/game.

How far will he ascend on this list after the completion of his career. He might barely crack the Top 5.

No one has ever won more championships than Bill Russell. Enough said.

The author of one of the greatest basketball shot called by many as the Baseline Move.  Over his career (via the ABA and NBA), he averaged  24.2 points/game and 8.5 rebounds/game.  3 titles, 4 MVPs, and the originator of playing above the rim.

Points for the fro. Minus points for his ABA career.

Duncan began playing basketball in 9th grade but will likely go down in history as the greatest Power Forward of all time.

Plus points for the greatest bank shot in the game. Minus points for looking shocked every time he’s called for a foul.

Well, what do you think?

So many worthwhile contenders that I will simply include as Honorable Mention members and some that could easily be in slots 9 and 10 on my list:

As for Lebron, let’s wait till he wins couple championships. We all know he’ll easily be amongst the Top 10 players and likely in the Top 5. But let’s wait…

165 Replies to “the top 10 basketball players of all time”