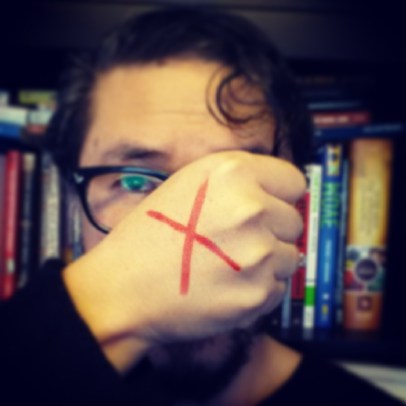 There are approximately 27,000,000 – 40,000,000 million slaves in various forms all around the world. Human beings. People. Women, men, and children. We can’t mince words: It’s wrong and evil. For this reason, I’m sharing my support for ‪#‎EndItMovement‬. It sickens me to even have such a day or movement for this purpose but such is the reality of our world.

But for those that don’t know about #EndItMovement, here’s a summation:

…Join us and other Freedom Fighters from around the world as we SHINE A LIGHT ON SLAVERY. Draw a RED X on your hand. Tell your world that slavery still exists and YOU WON’T STAND FOR IT. Just use your influence any way you can to help us carry the message of FREEDOM so even more people know. Let’s make this SHINE A LIGHT ON SLAVERY DAY even brighter than ever.

I support it and thus, I’ve taken the time to place an X on my hand…and to join with others in proclaiming that I don’t want this to be just merely a gesture, a red mark, a one time action…

I deeply appreciate Louie and Shelly Giglio – the founders of the Passion Movement and the instigators of the #EndItMovement. While it would be inaccurate to say that I know them personally, I’ve met Louis on couple brief occasions including at a meeting at the White House on the matter of human trafficking. He was also generous to write an endorsement for my book, Overrated: Are We More in Love With the Idea of Changing the World Than Actually Changing the World?

Since organizations, leaders, and influentials have done such a good job in bringing the issues of human trafficking to the view of the larger mainstream, it’s especially important to highlight not just that “Human trafficking is wrong” but the critical discussion of “How we engage this justice work…”

The “How” is as important as the “What”…

Because I’ve been reading and hearing some comments and thoughts that have made me cringe a little, I’d like to humbly offer some random and quick thoughts – confessing that I don’t clearly know it all. In fact, you should run away as fast as possible from those that advertise that they know it all. What I have learned is that doing justice work is important but it’s even more important that we do it with integrity, transparency, and dignity – rather than a skewed perspective to feed our own personal savior complexes.

1. Why our heart and motivation matters.

For us as Christians, our theology matters. Meaning, what motivates, moves, and stirs us to do what we do.

Simply, our God is just and God loves justice. Justice is not an accessory God puts on and off like a trendy wardrobe. Justice reflects the character of God and thus, justice must reflect the people of God.

Now, don’t get me wrong. There’s critical and important work to be done. There is grave injustice to fight and justice to be pursued. There’s hard work and tenacity required…

But let’s not be afraid to ask the important questions of “Why” and “How” we engage all this important work – whatever we may be convicted of. Anything less than makes us vulnerable to being one-hit wonders rather than compelling us to the long, arduous, and tenacious marathon of justice.

2. Why we can’t reduce people into projects.

Human trafficking is not just an issue. It’s ultimately, about people. Depending on the sources of statistics, there are anywhere from 29-36 million people in some form of forced labor and slavery.

And one thing I’ve learned, personally, is how easy it is easy to reduce people into projects. Mutuality. Reciprocity. Dignity. These are critical because God never intended people to be reduced into projects.

We forget this and we indirectly foster a culture and system of victimization or worse, the pornification of the poor.

3. Why human trafficking is complex.

When people speak of human trafficking, they tend to be ‘attracted’ to the issue of sexual exploitation. Dare I say it, that topic has become trendy.

Clearly, it’s evil and egregious. But to reduce the entire issue of human trafficking into one form is not helpful. Because the mission is to fight the entire injustice of slavery. And if that’s the commitment, we have to not only combat sexual exploitation but engage in issues of forced labor, commercial exploitation in tourism, land rights and power abuses, organized crime networks, cultural and economic realities, etc.

Wouldn’t it be great if it was that easy?

But for those who are critical and even cynical about the #EndItMovement, I can’t think of any substantive actions that have ever occurred without a groundswell of awareness.

But we have to make sure awareness does not dwindle to atrophy.

5. Why our language and methodology matters.

Let’s be honest. We often want to appear to be the liberators, the heroes, the saviors…

If we’re not careful, we’ll fall into our Messianic or savior complex. This is still a growing edge for me (as I would assume it would be for others) but maintaining the human dignity of those living in oppression is absolutely critical. Some even more random thoughts:

a) Let’s be careful with the stories we share. Don’t fabricate. Don’t exploit those that we’re “helping” by using them beyond what should be ethical, dignified, etc.
b) Let’s be careful with the photos we take, distribute, and even lavish around on our merchandise. Let’s remember: These are human beings. Girls and boys. Women and men. Do we want photos of our kids on peoples’ t-shirts?

There’s something disgusting about engaging in the work of justice…unjustly.

And this can especially happen when people fail to follow through on their commitment to transparency.

Please: Make sure all your financial are front and center so that it’s easily accessible and understandable.

Please: Don’t glamorize the work or beautify it. Anytime someone paints the work of justice – including human trafficking and development – as perfect, beautiful, and without challenges and complexities and mistakes…Run. And run fast. Something is not right.

7. Why we can’t forget the small on-the-ground NGOs and CBOs.

The #EndItMovement has enormous momentum. It’s brilliant. It’s also encouraging to see numerous large and ginormous NGOs like IJM, Love146, World Relief, World Vision, Not For Sale, etc. as part of their “coalition.”

We should always celebration collaboration.

As we celebrate their work, it’s especially critical that we highlight the work of small NGOs and CBOs (community based organizations) that simply don’t get the attention. They don’t have the budget, the people power, the marketing fund, the celebrity endorsements…but their work is incredibly important, too.

The truth is many of these larger NGOs work actually through some small CBOs/NGOs on the ground – without this being widely known.

And then…there are just many small NGOs and CBOs that are tirelessly working on the ground. In speaking with some of them, they’ve honestly shared their frustrations with such kinds of movements because there’s no room and acknowledgement of their work – especially CBOs led by local indigenous leaders. The bigger orgs continue to get funding, mass marketing, endorsement, invitations, and support…and then, there’s the small, little, puny orgs that keep plugging away.

Clearly, there’s room for both…but I hope you’ll take time to learn and support smaller orgs as well. We need small, medium, large, and ginormous orgs… But, this is one reason why One Day’s Wages and our Human Trafficking Fund attempts to work with smaller organizations that most folks have never heard of.

8. Why solutions are not in isolation.

Oh, this is too complex to discuss in a bullet point but, much of the injustice in our world is not an isolation in itself. For example, you can’t talk about issues of poverty without issues of education.  Or water. Or access. Or gender inequality.

Such is the case with human trafficking and slavery and if this is the case, solutions aren’t in a vacuum by themselves.

Painful and true story: I met a guy once who reveled in “freeing” girls caught in sexual exploitation (especially in brothels).

It made for a great story and testimony and fundraising. The dark truth he encountered was that many of these girls were back in brothels or some form of exploitation because there was nothing for them to live into. No jobs. No stream of income. No sustenance. No community to come alongside them with care and rehabilitation. But, he confessed he couldn’t share that part of the story…because it would impact…fundraising.

As glamorous as it sounds to “rescue slaves”, we have to see the bigger picture about jobs, aftercare, economics, counseling, education, access to health care, cultural stigmatization … which explains why collaboration is so important.

So much more to share but thought I’d share these quick thoughts for now. Would love to hear from others.

What do you think?
What am I missing?
What else can we be learning?

17 Replies to “Why we should support #EndItMovement and why we must ask these critical questions about human trafficking.”