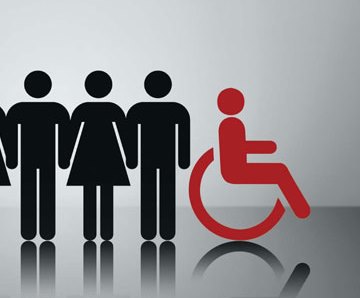 We live in a world where people are named, categorized, and labeled based on what they can and/or cannot do. Most often, those with perceived “disabilities” are primarily seen as less valuable, important, or worthy. In contrast to this, we know we are ALL created and made in the image of our God; this image includes our gender, ethnicity, and abilities.

Today’s guest post is from Pam Christensen, Associate Director of Children and Family Ministries at Quest.  This is important. Really important. And it is also really vulnerable as she shares of her “disabilities.” I need you to read it because it touches a topic that is rarely spoken of not just in our churches but in our larger culture. It’s the topic of disability and how we view or not view those who are disabled.

Read on and let me know what you think. Let me know of your experiences. Let us know how the Church can grow and learn in this area.

I have disabilities. I have two chronic illnesses and a learning disability (yes, adults can and do have learning disabilities and yes, they still affect us, even when we are not in school, but that is another blog posting for another day). Between them, my diagnoses affect how I sleep, how and what I eat, my relationships, my finances, my breathing, my work, even my driving.

I am broken…but maybe not the way you think.

Then there is the myth of ability: a whole, sound mind and body, as defined by science and culture, is the “ideal”. Anything else is “less than”. That’s made clear even in the language we use: disability, literally “not able”. A victim. A problem. Broken. END_OF_DOCUMENT_TOKEN_TO_BE_REPLACED

* UPDATE: Amazing. Not only because Joon donated half of his youth pastor salary ($10,000) but in his attempt to get that matched through family, friends, and strangers…a total anonymous stranger (after reading his story) made a donation of $8,085 to help him reach $20,000 for the Human Trafficking Fund.

You have to read this email I recently received. Crazy, radical, and an amazing story of courage and generosity.

First, let me set the table:

We all love our stuff. All of us. We all consume. We all get sucked into the lifestyle of  upward mobility. This is most apparent during the festivities that surround Black Friday, Cyberspace Monday, and Christmas shopping.

This isn’t a guilt trip but to simply state that which is obvious. What I do want to state is the importance of us also growing a culture of generosity in our lives. Generosity isn’t just for others…but also for us:

Generosity isn’t just merely for the sake of blessing OTHERS. Even more so, it’s to rescue US from the abyss of our greed.

Generosity is what keeps the things I own from owning me.

Let me share a crazy story of generosity and a reminder – once more – that you don’t have to be a rock star, a billionaire, or a celebrity to make an impact.

Recently, I received an email from a youth pastor named Joon Park  from Florida. I’ve never met him, don’t know him, and never heard of him. In his blog, he describes himself as:

April 7, 2012 Update: “As Christians around the world prepare to celebrate Easter, Iranian pastor Yousef Nadarkhani remains in jail — alive, yes — but having already passed his 900th day behind bars for being a Christian and still facing a possible execution. Nadarkhani, whose first name also can be spelled “Youcef,” was able to visit with a son on the son’s birthday Monday (April 2), according to the American Center for Law and Justice, which is closely monitoring the case. His 900th day in jail occurred in late March.’ [read full news]

* On this Easter weekend, join me in praying for Pastor Nadarkhani and so many others around the world who are facing persecution – even death – for their faith in Jesus Christ. “In more than 40 nations around the world today Christians are being persecuted for their faith. In some of these nations it is illegal to own a Bible, to share your faith Christ, change your faith or teach your children about Jesus.” [via Persecution Worldwide]

Feb. 2, 2012 Update: The latest news is very difficult. According to numerous sources including CNN and FOX News, Iranian Pastor Youcef Nadarkhani has been given the ruling to be executed:

A trial court in Iran has issued its final verdict, ordering a Christian pastor to be put to death for leaving Islam and converting to Christianity, according to sources close to the pastor and his legal team.

Supporters fear Youcef Nadarkhani, a 34-year-old father of two who was arrested over two years ago on charges of apostasy, may now be executed at any time without prior warning, as death sentences in Iran may be carried out immediately or dragged out for years.

The entire world – regardless of faith or non-faith backgrounds should be in solidarity to declare that “a person cannot be put to death because of one’s faith.” This is an egregious human rights tragedy and clear affront to religious freedom. Please take a few minutes to educate yourself, read this post, contact your elected officials, and help spread the word.

What would you do if your pastor was going to be executed simply for his or her faith?

For that matter, what would you do?

Such is the situation for more people around the world than we want to believe. We know that persecution of Christians began…well…when it began with the life, crucifixion, and resurrection of Christ.  Some Christian missions organizations cite that an estimated 100 million Christians face some form of persecution including death and concentrations camps – particularly in North Korea, Iran, and Saudi Arabia. I’ve written before of the concentration camps for mostly Christians in North Korea.

And this leads us to the story of Pastor Youcef Nadarkhani. END_OF_DOCUMENT_TOKEN_TO_BE_REPLACED

I received this email recently in the wake of the devastation in Haiti. I’ve been working overtime this week helping set up the ODW Haiti Relief Fund. We increased our goal to $100,000. If you’re thinking of donating, consider partnering with us.  But in the midst of busyness, I haven’t had a chance to answer many of my emails including this one from one of our blog readers. I think it would be good for us – together – to wrestle, answer, question, and believe along.

Read it and let’s discuss. Whatever you do, please don’t mention Haiti and the Devil in the same sentence. But I’d love to hear some of our collective thoughts.

Here’s the email I received:

I wanted to ask you for some help. As someone who knows and believes in God’s amazing love as represented in Christ and His love, I also know that I have doubts in my own faith.

Particularly, I have always struggled to comprehend or to help others understand God’s love when great tragedies like natural disasters happen (or any tragedy). I have just recently visited Haiti END_OF_DOCUMENT_TOKEN_TO_BE_REPLACED

Please do yourself a favor and take a few minutes to read this and pass it on to others. I want to share 7 Life Lessons of a younger man named Craig Wong (1972-2009) who despite his arduous battle with brain cancer over the past 15 months, began sharing “Craig’s Life Lessons” to as many people who would listen…

The call of being a pastor has its ups and downs – as it reflects the ups and downs of life.  I believe in the gospel that is Christ and the good news that not even death can separate those that have claimed Christ in their lives.  But there is still mourning and grieving in the loss of a loved one.  As a pastor, there are times I honestly wish I didn’t or couldn’t be emotionally connected to my flock.  But then, that simply wouldn’t be worth it.  This past year, our church came alongside the pain of numerous in our church community. I presided over the memorial service of a newborn baby that died 3 minutes after birth.  Today, I officiated the burial service of Craig – son, brother, husband, father to two, and friends to so many.

Honestly, I did now know Craig well prior to the diagnosis of a brain tumor in October 2007.  He was experiencing headaches so he went in to the doctor on a regular Friday afternoon for what he perceived to be a “routine check-in” only to be told he had a brain tumor.  I remember receiving that phone call.  The brain tumor was initially diagnosed as benign but when they went in to remove the tumor several days after that Friday, it was found to be malignant and the tumor has already begun its ugly growth.  I have gotten to know Craig, his wife, and their larger groupr of family and friends over the past 15 or so months and realized that even in his 36 years of life, he left an amazing legacy.

He loved his wife, loved his children, loved his family, and was devoted to his friends.  And all those relationships were informed by his faith and love for Christ.  This was apparent today as several hundred folks gathered later in the afternoon after the burial for the “celebration of Craig’s life.”

I still remember learning about his first response once he work up from his first surgery upon learning the tumor was not benign but malignant:

“Is this hereditary?  Will my kids be ok?”

I don’t know why this has been so emotional.  I guess they all are in their own way.  Perhaps, it’s because END_OF_DOCUMENT_TOKEN_TO_BE_REPLACED